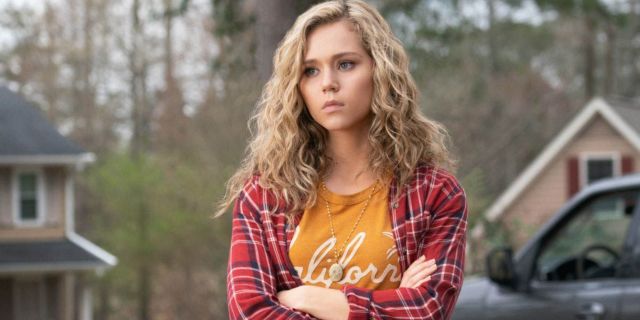 The CW has released photos for the upcoming series premiere of Stargirl. The series, which will launch first on DC Universe on Monday, May 18 and then see its network premiere on The CW on Tuesday, May 19 will follow Courtney (Brec Bassinger), a high school sophomore as she moves to Blue Valley, Nebraska after her mother (Amy Smart) marries Pat Dugan (Luke Wilson) and inspires an unlikely group of young heroes to stop the villains of the past. The series will take inspiration from the Stars and STRIPE comic, and according to Stargirl co-creator and executive producer Geoff Johns will also have a tone similar to that of Spider-Man: Homecoming and Buffy the Vampire Slayer.

According to the official synopsis for the pilot episode, which was previously released, the episode will see Courtney move to Nebraska and struggle to adapt to her new hometown. She’ll also discover her stepfather’s secret, but the photos released form the episode focus largely on Courtney’s new life transition. Absent are any indications of her heroic destiny, but don’t worry. We’ve seen plenty of looks at the young heroine’s first forays into bringing forth a new generation of justice in teasers and trailers for the series.

You can read the official episode synopsis below and scroll on for photos from the episode.

“Stargirl”: In the series premiere episode, Courtney’s seemingly perfect life in Los Angeles gets upended with a move to Blue Valley, Nebraska with her mother Barbara (AMY SMART), stepfather Pat Dugan (LUKE WILSON) and stepbrother Mike (TRAE ROMANO), and she finds herself struggling to adapt to her new town and high school. But when Courtney discovers that Pat is harboring a major secret about his past, she ultimately becomes the unlikely inspiration for a new generation of Super Heroes.

Stargirl debuts Monday, May 18 on DC Universe and on Tuesday, May 19 on The CW.