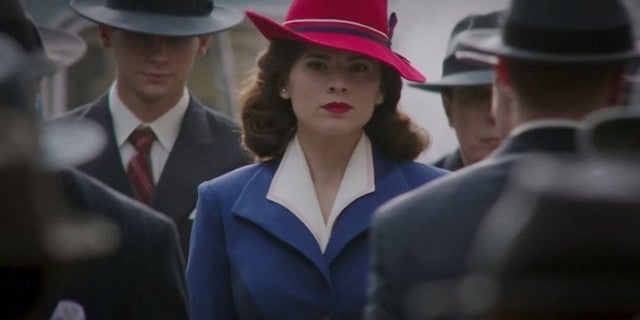 During yesterday’s Quarantine Watch Party screening for Avengers: Endgame, one of the things you will have learned if you paid close attention is that writers Christopher Markus and Stephen McFeely seemed to really love Professor Hulk and the Steve/Peggy relationship. Along with the directors, they praised the sequences between Captain America and the love of his life, Agent Peggy Carter, and seemed to suggest that they wished they could have used a bit more. In one instance, in fact, Markus (while tweeting from ComicBook.com’s Twitter account) revealed that the scene in Peggy’s office, when Captain America was time-traveling and almost encountered her, almost had her iconic red hat.

It makes sense that they would have gone the extra mile for the Peggy content: in another tweet, the Russo Brothers admitted that the shot of Steve and Peggy through her office window was their favorite shot of the movie.

You can check it out below.

For fans who followed Steve Rogers’ story from Captain America: The First Avenger, the ending of Avengers: Endgame was the poetic finish that they had been waiting for, for nearly ten years. Steve finally got his dance, and we finally got to cry those tears of joy. The anticipation built by that final crane shot outside Peggy’s house was too real, and the payoff was completely fulfilling, when we finally saw what Steve Rogers’ fate would be.

Of course, Endgame also left Marvel fans with quite a lot of question s that still need answering. There’s now multiple timelines in the MCU, where Cap both returns to the 1950s with Peggy, but also somehow shows up as an old man in 2023, with a brand new shield to pass on to Sam Wilson. Those multiverse happenings will be a part of the MCU Phase 4 saga, with WandaVision, Loki, and Doctor Strange 2 all addressing those sci-fi notions. Marvel’s What If? animated series will also begin by exploring an alternate past where Cap and Peggy are together – only this time, Peggy becomes the super soldier hero, while Steve gains an early Iron Man armor from his friend Howard Stark.

Avengers: Endgame is now available to stream on Disney+ Avengers: Infinity War will hit the platform on June 25th. Keep your eyes on ComicBook.com for more announcements of upcoming Quarantine Watch Parties.