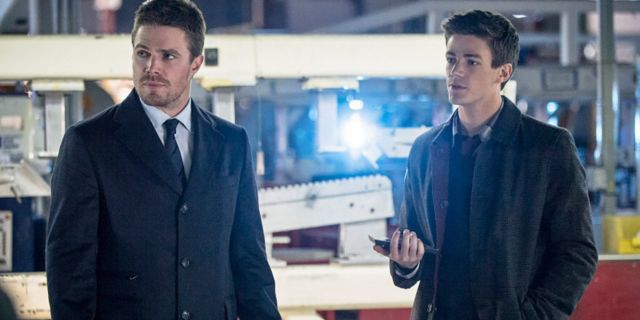 With The CW’s The Flash nearing the end of its sixth season it’s easy to forget that Barry Allen’s first Arrowverse appearance came not on his own show but on Arrow. Grant Gustin memorably made his debut as Barry Allen in the show’s second season “The Scientist” and followed it up with the following episode, “Three Ghosts”. But what most fans may have forgotten is that Gustin was supposed to appear in three episodes of Arrow that season. A later episode was supposed to be a backdoor pilot for The Flash, but the character turned out to be so well-received it didn’t happen. The show got a proper pilot of its own.

Gustin recounted this in the latest episode of Inside of You with Michael Rosenbaum, revealing that’s the development that made him realize that The Flash would end up going to full series.

“I was cast on Arrow first, it was I did two episodes of Arrow and I was supposed to do a third episode of Arrow that was going to be a backdoor pilot, but the character was received so well they decided to do a standalone and I knew from then I was like what we’ll get a series just because it’s The Flash,” Gustin said.

As was reported at the time, Gustin’s Barry was set to also appear in the twentieth episode of Arrow‘s second season which would have been the formal backdoor pilot. Instead that episode, “Seeing Red”, saw the death of Oliver Queen’s (Stephen Amell) mother, Moira (Susanna Thompson).

While the popularity of Gustin’s Barry Allen ensured The Flash‘s proper pilot and has led to the series’ continued success, however, Gustin also revealed to Rosenbaum that he deals with anxiety and impostor syndrome, too.

“I think one thing I really struggle with – me and my wife were actually talking about it recently, and me and my mom have this conversation all of the time, she’s the one who really pointed out to me that I have Impostor syndrome, for sure,” Gustin explained. “I don’t think I ever deserve anything that I get, or that I’m not worthy or I didn’t work hard enough for it, or someone else worked harder or was more talented. That’s something I struggle with all the time, just being okay with where I’m at, and feel like I deserved it or earned it. That’s one thing that really makes me feel lucky all the time, I don’t know how I got to where I’m at, like almost ever.”

The Flash airs Tuesdays at 8/7c on The CW.