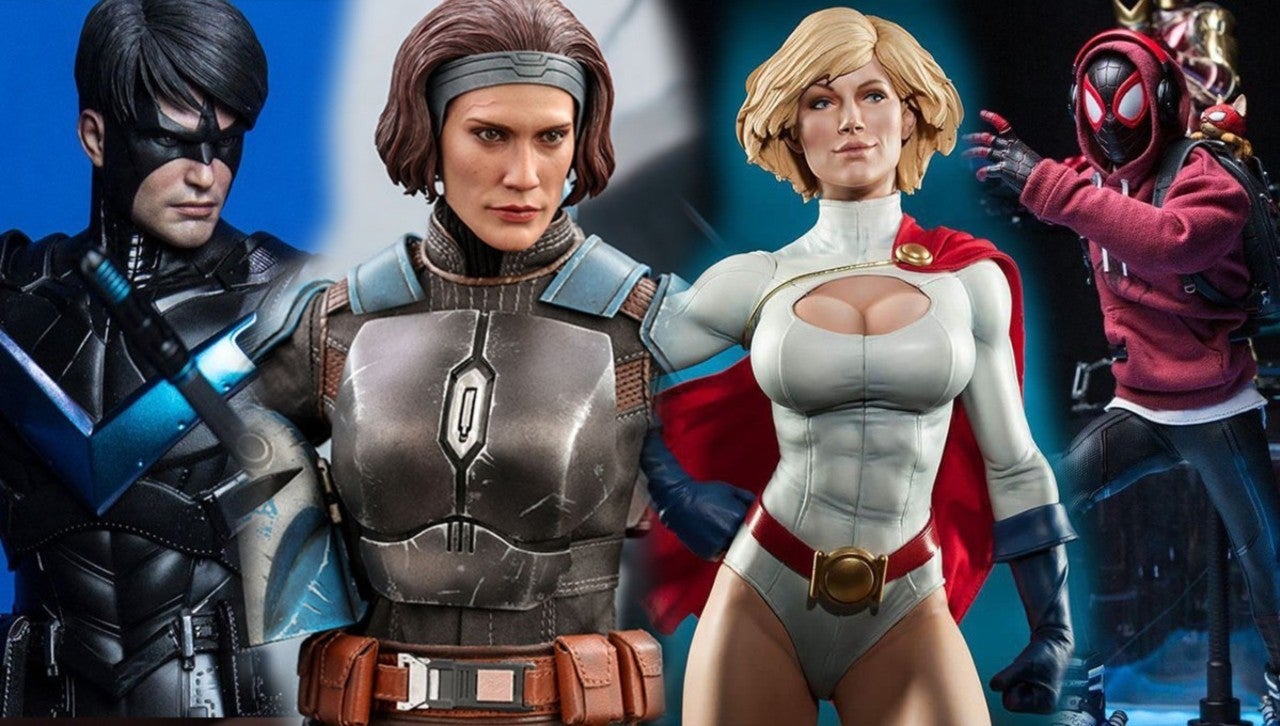 Over the weekend, Sideshow Collectibles presented a virtual event known as Micro Con during which LOST and The Mandalorian alum Titus Welliver played host to several new reveals from the upcoming product line. As with all conventions since March of 2020, Micro Con aimed to provide fans with an experience similar to that of an in-person comic convention from the comfort and safety of their own homes. “The limited-time live event was jam-packed with panels and programming, digital meet and greets with celebs and pop culture creators, and multiple Sideshow booth tours featuring brand new reveals and exciting upcoming products Sideshow and their partners,” is how Sideshow describes the event.

Throughout the panels came several exciting new reveals for products which Sideshow Collectibles will soon be making available based on some of the hottest properties right now. Following ComicBook.com’s exclusive reveal of the massive new Galactus maquette, the partners with the popular distributor still had plenty to show off. If you want to see more products of this quality, watch the unboxing video above or check out ComicBook.com’s look into the massive Hulkbuster sixth scale figure on our YouTube channel and stay tuned for more exclusive looks.

Scroll through some of the exciting reveals from Micro Con below!

Unveiled for the first time ever at Micro Con, Hot Toys debuted the Miles Morales Bodega Cat Suit Sixth Scale Figure. The latest suit based on the unlockable costumes from the hit video game Marvel’s Spider-Man: Miles Morales. This highly posable figure sported a fully-tailored costume and game-accurate look featuring his scene-stealing Spider-Cat companion in his backpack. Complete with the roller blades on his feet!

Anyone else catching Black Widow’s Taskmaster on the back left?

Inspired by the Marvel’s Avengers video game, the Iron Man 1:3 Scale Statue measures 35.5” tall and 18” wide, jetting over a monstrous claw base as he combats the tyranny and stolen technology of Advanced Idea Mechanics, better known as AIM. Tony Stark’s suit is fully sculpted to capture the technological look and feel of the suit from the game.

Based on his in-game appearance, the Iron Man Statue is detailed with numerous segmented panel elements in his classic red and gold color scheme, with silver accents revealing the inner mechanisms of the tech. The statue also features dynamic Bluetooth enabled and app-controlled light-up elements throughout, including in Iron Man’s eyes, arc reactor, and hand repulsors. Key points on his arms and legs as well as on the claw base also illuminate to give this Marvel collectible an activated appearance in your collection. Click here for more info on this PCS figure, clocking in at $1,950.

Sideshow and PCS revealed the Deadpool 1:3 Scale Statue, inspired by the insanity of Wade Wilson as he appears in the Marvel Contest of Champions game.

The Deadpool 1:3 Scale Statue “comes with more display options than toppings at a taco truck,” according to Sideshow’s fun description. The massive statue of Deadpool stands 24” tall. When Deadpool stands guarding his “ultra-mega-awesome unicorn showcase base,” as the description refers to it, this Marvel collectible measures a whopping 38” tall and 12” wide. The full base includes a rotating Uni figure, light-up features, and removable cling signs to scare off any dastardly thieves. Check out more info on this $1,275 collectible its landing page.

Little was revealed about the new Hot Toys figure for Nightwing.” Sideshow and Hot Toys presents the Nightwing Sixth Scale Figure based on the Arkham Knight video game,” the description on the product’s RSVP page reads. “This DC Comics piece was featured during the Micro Con Digital Event and will make an excellent addition for anyone looking to expand their Batman collection. Be sure to RSVP in the meantime for updates on when this piece goes up for pre-order.”

“The Superman: The Movie Premium Format Figure measures 20.5” tall, lovingly crafted in the iconic likeness of actor Christopher Reeve as Superman,” the item’s description reads on its official landing page. His portrait features stunning blue eyes, a confident but humble expression, and the signature kiss curl in his hair, capturing Clark Kent’s incredible alter ego. Superman stands on a base inspired by the poster for the 1978 film, depicted here as a black circular platform with a raised silver recreation of the hero’s unique shield emblem.” The product is priced at $585 and expected to start shipping in December of 2021.

The pictured above Power Girl Premium Format Figure was revealed, priced at $585.

“Soaring through the skies above a swirling cloud base, the Power Girl Premium Format Figure measures 25” tall,” the collectible’s description reads. “As the cousin of Superman from Earth-2, Kara Zor-L is known for her strength, maturity, and Kryptonian physiology, empowered by Earth’s yellow sun. She poses powerfully here, flexing her muscles in a moment of calm between battles.” The Power Girl Premium Format Figure is expected to ship between April and June of 2022.

The Hot Toys roll out of figures from The Mandalorian series continues, this time with Katee Sackhoff’s Bo Katan-Kryze who debuted in live-action during the Disney+ show’s second season. The 1:6 scale figure is seen in the photo above.

The Bo-Katan Kryze 1:6 scale collectible figure features a newly developed head sculpt with remarkable likeness, skillfully crafted Mandalorian helmet and armor with weathering effects, meticulously tailored and form-fitting under-suit, a jetpack with booster fire effects, a pair of blasters, a dagger blade, diorama accessory, and a themed display stand. It prices at $285 and is expected to ship between April and June of 2022.

Boba Fett became one of the most buzzed about characters when he returned to the Star Wars world in The Mandalorian Season 2 and now Hot Toys s continuing his immortalization. A collector’s edition of the new Hot Toys figuree comes with the Armored Boba Fett for $285 while the Deluxe Edition includes a figure out of the armor and more accessories for $495.

In the words of Wong, “What… you wanted more?” Well, in this case, you’re getting. More reveals from the Micro Con event include the Mondo figures from God of War, Rick and Morty, The Iron Giant and more seen above. The full booth area from Mondo and Enesco colectibles can be found on Sideshow’s landing page for the event.

For more info on Sideshow’s Micro Con reveals, check out their page loaded with new products and detailed looks at new collectibles from Marvel, DC, Masters of the Universe, Power Rangers, and more.