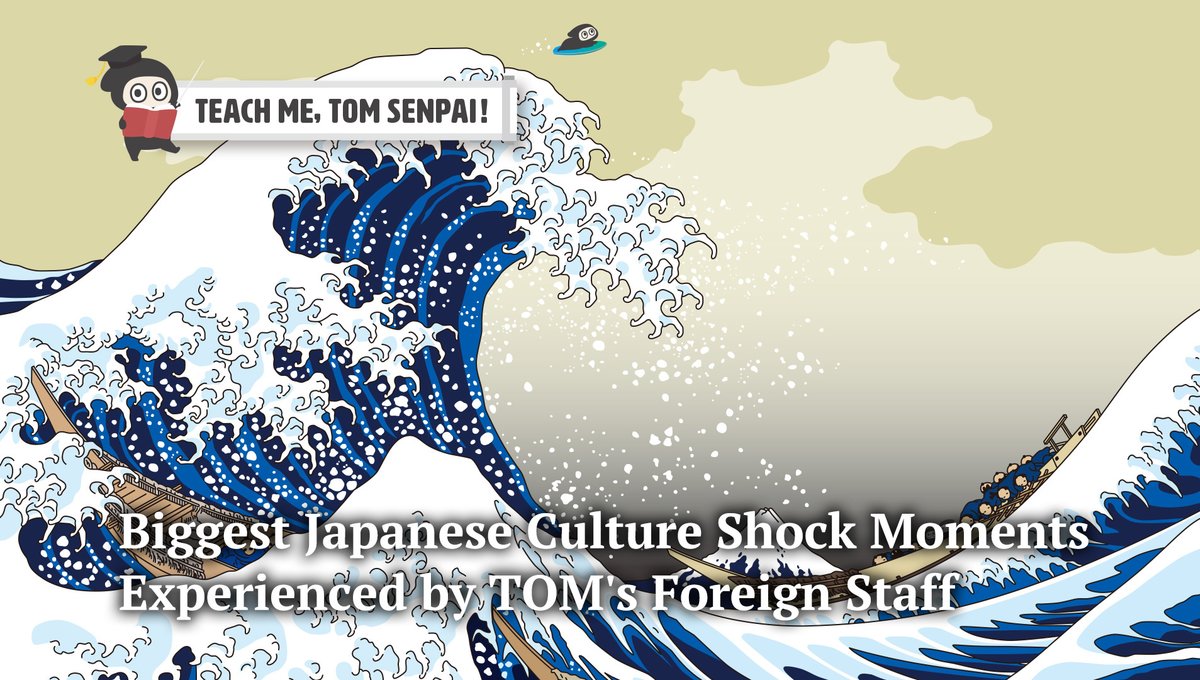 When seen from the outside, Japanese culture can be quite puzzling, so we asked the foreign staff at Tokyo Otaku Mode what surprised them when they came to Japan. From food, safety, and transportation to services, movie theaters, and even water bottles, all their answers are intriguing and grounded in real life experiences. Nevertheless, we hope you’ll want to visit Japan after reading this article!

There’s no noise on public transportation, such as trains or buses
In China, passengers make phone calls or chat in loud voices, but Japanese passengers are very quiet. Even when trains are packed it’s quiet, so it felt so strange to me at first.

A lot of people pay in cash
In Canada, I used to only carry my credit cards in my wallet, but after I started living in Japan I had to buy a new wallet that would fit cash. I bought a change purse as well. Now I use Apple Pay too, but when I first came to Japan I was astonished, or rather, I thought it was very inconvenient.

Woolen hats
I don’t know if this is common throughout Japan, but in Tokyo, where I live, people who wear woolen hats don’t pull them down to cover their ears. Please wear them properly, haha!

A lot of people don’t guard their belongings
Around the city or riding trains, you don’t really see people trying to guard their wallets or purses. I was surprised in a good way to realize that in Japanese society, petty theft is uncommon.

Drinking alcohol outside, in parks or along rivers, is not regarded as bad
In the US, it is mostly forbidden to drink alcohol in public places such as parks, while in Japan, the “hanami” culture is about drinking alcohol in parks while admiring the cherry blossoms.

Tamagoyaki (rolled omelets)
When I was studying abroad in Japan, my host mother was originally from the Kansai area. She used to pack a bento lunch for me every day. I was very happy about it, but on the first day she packed a tamagoyaki in it and when I ate it… it tasted incredibly sweet. The moment I put it in my mouth I was shocked that it tasted completely different from what I’d expected. Later I asked my host mother and she told me that in the Kansai area (where, for example, Osaka is located) it’s common to put sugar in tamagoyaki. That startled me!

Customer service
When you go to an apparel store, for example, you can always hear the staff greet you with a “Welcome!” but they don’t talk directly to the customers at all. In the US, when you enter a store, staff will immediately ask you, “Are you looking for something in particular?” or, “May I help you?” but in Japan, they will never talk to you unless you ask them first (lol).

Safety
The number one thing for me in terms of culture shock was seeing young elementary school kids walk home from school without any supervision. We’re so used to school buses and carpools in the US that kids really don’t walk home unless they live next to the school, and even then, that’s like late elementary or middle school age at the earliest.

I’ll never forget the time I saw two kids playing close to the crosswalk at an intersection. My heart jumped because I was afraid they might run out into the road on accident. Luckily, the more I became familiar with the culture, the more I realized that they knew the rules and were used to walking home alone or while playing with their friends.

While I won’t say a little voice in me doesn’t worry when I see a first grader crossing the street alone or with a few friends, it does help ease my mind knowing the differences in cultures.

Fax
I think that seen from abroad, Japan has an image of being a very technologically advanced country because we see all these robots and other cool pieces of technology that make international news, but we don’t really see how more mundane things work on a day-to-day basis. Once I came to Japan I realized there are areas in which this is not the case. On my first job here, I needed to use a FAX machine almost every day and it was shocking to me. I don’t think I ever even used a FAX machine when I was in America.

Pizza Toppings
It’s shocking to me that they put mayonnaise on top of pizza. The first time I ordered pizza from a chain in Japan I just really couldn’t believe that they had things like mayonnaise as a topping. It could be a regional thing but there’s just no way that would show up as a topping where I lived in America.

High-quality taxis
I experienced culture shock in a good way with the amazing quality of taxis. Where I lived in America, the quality of taxi services was not necessarily the best. Shortly after arriving in Japan I had to take a taxi and remember being impressed with how well maintained the exterior and interior of the taxi was. This applies to a lot of public transportation in Japan as well.

☆ Caroline (Singapore, but I lived in Australia from ages 16 to 21/Customer Support, Translation)

Movie theaters
The first time I went to see a movie at a cinema in Japan, I was astonished that people would stay in their seats even after the movie was over and watch all of the end credits as well. Now I’ve learned and I watch till the end too. I now cherish that time and use it to sort out my feelings when I’m still excited about the movie.

Water bottles
My first job in Japan was as a teacher at an elementary school in Shiga prefecture. In my native Singapore we’re careful about staying hydrated, so I kept using a light, non-insulated bottle that I brought with me from Singapore, but at this school teachers and students would always carry a large thermos-style water bottle even during their incredibly hot summers. They thought it was strange that I was using a non-insulated bottle. However, Shiga’s winters are freezing, so I stopped using that bottle and immediately bought a thermos (lol).

What did you think about the culture shock experienced by TOM’s foreign staff? A few things might have surprised you, but that’s also part of Japan’s charm. Once it’s safe to travel to Japan again, come and get a feel for Japan’s curious culture and enjoy it! You’re sure to fall in love with Japan, just like Tokyo Otaku Mode’s foreign staff did.

This is a Tokyo Otaku Mode original article by T. Hara.